Coming out of Hibernation

Winter seems to be over. I don't want to say that too loud, not here in northern Indiana.  We've have plenty of snow and ice storms this time of year to warrant being wary of  making bold statements about winter or the lack there of.  This unseasonable weather has made me long for a nice run.
Last year at this time I was in training to run in the 500 festival's 5k race.  A friend had talked me into signing up to run.  Three of us signed up to run to give each other the motivation not to back out even if we had to walk.  I was in good physical shape, I had been running indoors on the track at the gym I belong to but I've never been a competitive runner.
I figured that it was a good way to build up stamina for spring hunting season.  I couldn't have been more right.  When I had to run and gun for my Boss Tom last year it was this training that allowed me to maintain a steady heart rate.  The training also allowed me to calm down to shoot.  I know that doesn't seem like much but it can in the field make the difference between a hit or a miss.
Lining up for the 500 Festival 5k was a bit over whelming.  The 500 Festival 5k and Mini-marathon is one of the largest races in the United States.  I don't know what I had been talked into.  I was sure that despite my training I was going to be humiliated with my performance in the race.
I wore all black and my snappy little skull head band.  I figured I would blend that way and no one could really see how badly I did, it was like urban camo. 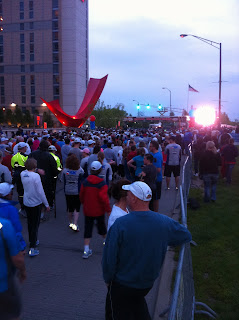 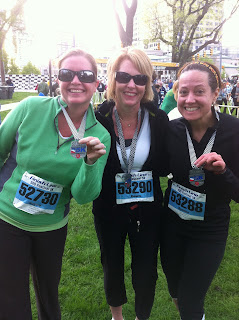 It was a cool day, great for running.  I kept a steady pace through out the race.  The truly unique part of this race was the live music along the route.  There were even belly dancers.  I finished the race in a new PR for me and I didn't throw up, so bonus!!  The unsuspected surprise of the race was the fact that I finished 4th in my age division.  Sometimes motivation and accomplishment come from unusual quarters.  The results of the hard work was not only the accomplishment in the race but the ease that I was able to translate the skills learned in running to running down my big boss tom.
Posted by D.L. Smith at 11:45 AM