The 'other' side of lake Michigan, the land of cheese and big Kings!  Hitting Wisconsin to fish in the 333 Salmon Cup with Captain Pat Kalmerton and the crew of Wolf Pack Adventures last weekend was a treat. We are no strangers to fishing in Wisconsin but I had never fished the west side of the big lake. 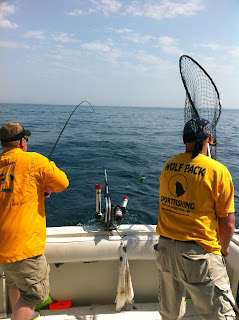 It was quite a few firsts for me.  I had also never fished in a tournament before.  I love fishing but I'm more about the experience and the ability to fill the freezer.  My desire to eat what I catch or kill is my main driving force.
The Salmon Cup was pretty straight forward to understand, you catch five fish and weigh those five fish. Whom ever has the heaviest total for the two days combined totals wins.  Easy Peasy right?  We lined up with the other boats for the shotgun start.  I am not a morning person, I stood bleary eyed as we took out of harbor at the shotgun start.  Captain Pat had a plan, he fishes this lake regularly with his clients on board the Wolf Pack 1.  Fishing for the large lake Michigan fish is a game of water temperature, he found a good location and we set out our limit of nine lines.  He set at various depth and with and without meat. I soon had a fish on.  Reeling in I landed a small salmon, good for the cause it was added to the icebox as we set out to find his big brother.


We trolled north and south in the ideal water temperature at a consistent speed, nothing happened.  We changed bait set ups.  Still nothing happened.  Others boats were landing fish but it was dry aboard our boat.
Fishing is full of little quirks and we began to suspect one of the bad omens of fishing-bananas.  Someone (I won't name names) had picked up bananas.  Never bring bananas on board a boat, it's bad luck. While we didn't have any on board, the offending fruit had been touched.  I asked the 'someone' if they washed their hands?
He immediately washed his hands in the lake.  I'm not superstitious but we immediately got a hook up. So whether it was the banana essence or something else I'm not going to say. What mattered was we quickly had a king on board.
We landed our five fish just in time to go check in our box.  We knew it was going to be light, every fish was fought hard for.  We weighed in at 42 pounds even but Wolf Pack 2 came in heavy (no bananas or banana essence, just saying) they were firmly in 4th place going into day two. 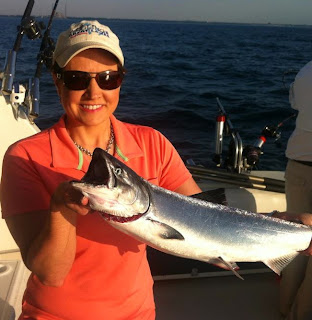 Day two felt completely different.  It was a little cooler especially on the lake and the flies were biting, thankfully I thought to wear long sleeves and pants.  The crew didn't so much as look at a banana before boarding.  They set up quite a few with meat and they threw in the secret weapon 'Dewey'.  I didn't question why a lure would be named Dewey but just looked for the results.  We got action right away.  Dewey must be a fish charmer.
I reeled in a small coho, we would see if we could hook his big brother.
Captain Pat grabbed a reel from the holder as a fish reeled off another 300 feet of line.  It was a good one. Captain Pat worked the fish alternately feeding it line and reeling it in, tiring the big boy out.  He fought the fish for a good 20 minutes before he had it up to the surface in the prop wash.  After the bad luck of the day before we were all holding our breath until we had the fish boated.  Scooping him into the Frabill net, we boated a nice heavy King.  This was exactly what we needed to bring our totals up. Plus we had almost six more hours to fish, it was a much more relaxed feeling on board.
We landed several excellent fish bringing our daily totals up into a respectable range.  Wolf Pack 2 finished in 2nd place overall and we were in a respectable 13th (I'm not saying anything else about superstition but 13th? Hummmm). 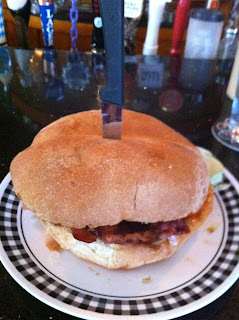 How do you celebrate a weekend of fishing in Wisconsin? Why a sandwich with a pound of bacon of course!  Pat took us down to Frankie's which is a charming little bar and grill just a few miles from the water in Sheboygan.  People in Wisconsin make you feel like you're at home and they know about the really important things in life, good friends, good fishing and good food!
Being on board the Wolf Pack was nothing short of awesome.  I can't wait to book a trip out with Captain Pat again, I'm thinking a ladies weekend in Wisconsin!!