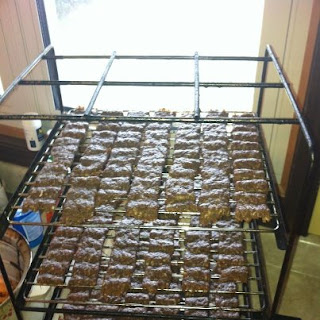 We are firmly set in the lull.  It is finally the time of year when there is very little to do in the great outdoors.  I can fish, but honestly-it's been too hot to fish.  I have been eyeing the bow fishing equipment hanging in the garage-so there are possibilities on that front, but once again my brain protests with-"But it's hot".
I have been avoiding heat and cleaning out our freezers lately.  The extra meat that we have is being transformed into jerky.  I purchased a jerky gun and have been going a bit crazy with it ever since. I have dehydrated using my old countertop dehydrator (I've had this thing around for about 20 years) and our Little Chief smoker.
The first batch was not adventurous, I used the store bought mix to make a slightly sweet spicy jerky.  It turned out surprisingly similar to the jerky I bought last year from our processor that was made by Zick's.  In my opinion, I just struck gold!  If I can make my own- nom nom nom!!!!
The second batch I used some sausage seasoning with a heavy pepper base that ended up salty but quite similar to a Slim Jim taste, also a score!  Next batch, I am still waiting for some inspiration.  I'm thinking perhaps a teriyaki flavor would hit the spot.
Posted by D.L. Smith at 8:30 AM