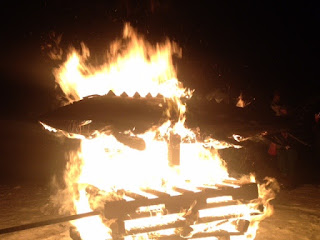 The Sturgeon Spectacular is set to kick off February 10-12 in Fond du Lac, Wisconsin nestled on the scenic shores of Lake Winnebago.

The sturgeon on Lake Winnebago are once again singing their siren song, calling those brave enough back to her icy blue waters.
It's nothing short of a conservation miracle that sturgeon exist today on Lake Winnebago. If it were not for the foresight of a few passionate sportsmen who wanted to sustain the fishery for generations to come, the sturgeon would have continued the downward spiral to extinction.  Thus, Sturgeon for Tomorrow was conceived.  Thanks to their tireless pursuit for the conservation of the species, the first sturgeon hatchery in the United States was opened, sturgeon watch was developed to combat poachers, and the sturgeon population on Lake Winnebago is thriving today.

Sturgeon for Tomorrow not only raises funds for hatcheries but also organizes "Sturgeon Watches" to combat the illegal poaching of sturgeon for roe and meat.  Poaching of sturgeon has long been a temptation, especially during an economic depression.  Depending upon the grade of caviar it can bring upwards of $200 an ounce.  It doesn't take much to imagine the temptation and the rising caviar market offering a shady quick payday.

Combating the temptation, "Sturgeon Watch" works during spawning season to ensure that the sturgeon make it to spawn.  Working in volunteer teams they line the banks of spawning areas to watch for potential poaching activity. Sturgeon can take up to 24-27 years to reach sexual maturity, ensuring that they are allowed to spawn rather than become a one time poachers profit has helped turn the tide of the once declining population.

Educating the younger generations through classroom programs and visits to the hatcheries has helped to generate new interest in the species.  A once little know bottom feeder is now celebrated in festival and classroom. The Sturgeon Spectacular is more than just fun, it's a way to be in touch with those conservationists that have come before.  It's a way to fish like our ancestors, out on the ice, peering into the depths.  Waiting for that ancient remnant of days gone by to come to the brightly painted decoy. To enjoy the camaraderie of all those that come every year with their brightly painted shanties and their party.  It's Sturgeon time. C'mon in.


Skating, kites, ice bowling anyone?  There is something for the whole family.  Fish, don't fish, watch the Spectacular from the coziness of one of the many locations on the lake, it's all there if you just C'mon in!