The National Wild Turkey Federation has put out a Spring Turkey Guide for states with a season.  It will be here quickly so those that wish to hunt need to plan accordingly.  The bag limits and seasons dates vary wildly so know the areas that you intend to hunt and what the laws are prior to going into the field.  Double check the facts in this guide with the state DNR web sites to insure that nothing has changed between publication of facts and time of your hunt.

Last night I made a wonderful paella with half a wild turkey breast.  For my first attempt at paella, I believe it was a success.The Fragrant Lemon and piquant edge of the chorizo set off the lean of the wild turkey breast. I can't wait to hunt again this year and to share my new paella recipe with my friends in camp during turkey season.  I will share the recipe tomorrow on my blog.

Finding things to do during a long winter can be a task, however, if you think like you are visiting your own backyard it can become quite a bit less so.  Often, I hear folks complain about nothing to do, when was the last time you accessed Convention and Visitors Bureau information?  Most likely
never for the area that you live in.  Your local convention and visitors bureau is a wealth of information for what is happening right now and into the future for your area.  They want you and people outside your area to have the up to date information, so that events are successful and the area you live in thrives.

Most Convention and Visitors Bureaus or CVBs have Facebook, Twitter, and Instagram pages.  They are user friendly sources of up to date free information.  For example, here in Indiana the South Shore CVA (Convention and Visitors Authority) is promoting  Maple Sugar Time at the Dunes beginning on March 4th. This weekend also at the Indiana National Lake Shore, Learn about two women who paddled a dugout canoe around the entire shoreline of Lake Michigan at The Indiana Dunes National Lakeshore Visitors Center on the 26th.  LaPorte County CVB offers similar activities with Maple Sugaring at Friendship Botanic Gardens on the 5th of March.

If sugar maples aren't your thing, maybe a little Geocaching across the boarder in Harbor Country.  Exploring the backroads in Michigan is never a bad idea, seeing nature from a slightly different point of view is a great way to spend the weekend.  The point is, get out of your house.  Explore your neighborhoods with fresh eyes.  See the wonder that's right there.  Most likely it's cheap or free entertainment.  You might learn something about where you live, you might learn a new skill, you might meet different people.  You will be off your sofa and outside.

Finding activities in a community is easy 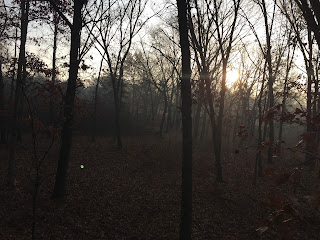 when you discover where to look. Being local doesn't guarantee that you will know about everything in your community. Use resources like CVBs to find the events or activities that will fit your lifestyle and family dynamic.  The CVBs want to help you and the organizations in their regions.  Engage with your communities and with nature, it's what you're meant to do.
Posted by D.L. Smith at 9:25 AM No comments:

The One I didn't Miss


I had all of my things together and ready as my husband Mark and I parted ways in the morning. We had agreed to meet around lunch to hunt together if I was not successful in the morning.  I set up on one of our fields where I have seen quite a bit of turkey activity in and waited.  I heard a gobble, but from where?  I didn’t see a turkey but I could see over 300 yards in three directions.  I caught movement from the corner of my eye and before I knew it a mature Tom was scooting along the field edge within 10 yards of the blind I was in.  Everything I have every been told about turkey hunting was going through my head.  They have excellent vision, don’t move! Don’t move, don’t move. I sat frozen, sure he could see my eyes following him.

I had to wait for the tom to get in a blind spot so I could move my gun into a shooting position.  He skirted the edge of the field so close that I lost sight of him behind some trees, I moved guessing his out come then I second guessed making a walking away shot.  My heart was pounding and I was berating myself for not being better prepared. I called to the tom on my slate but there was no turning him.  He trucked across the field and into the trees on his happy way.

My heart returning to normal as I glassed the field with my Hawke Optics Endurance ED binoculars, there was nothing except song birds, there would be no checking off the plaited woodpecker today, I was here on business.  I waited listening for sounds of turkeys far off.

Mark finally joined me, we would make a move into the middle woods.  During a midday sit the shady middle woods provides a perfect environment for birds like turkeys to forage for grubs and the fresh shoots of spring plants.  If the weather were to suddenly change, like it is likely to do in the spring, it also provides shelter from higher winds with its varied topography.  My chances in the woods were greater than the open windy field.

We had no sooner settled into the new location then we heard the distinctive cutting callings of turkeys coming through the tree line.  Following a meandering course across a small creek, a group of jakes worked into the clearing right in front of us.  As the group spied the decoys, the cartoon light bulb was lite above the head of one.  It was like he said, “Oh look it’s Ed from accounting.” I haven’t seen him since we went out for cocktails and fajitas.  He actually leaned on the Avian X decoy spinning it around on its pivot.  “Hey guys, Ed’s lighter on his feet than I remember.”

As the spring mating dance unfolded, Mark began to try to persuade me to shoot one of the jakes.  “Come on. The one is really big.”  He was right the one was really big but I had the picture of the mature tom fresh in my mind.

“They all taste the same”  He was right about that also.  I had harvested a jake last year, I love the meat and got my jake the first day of the season.  I could get a jake if I needed to, I was going to wait and see what happened.  Mark continued his ‘jakes are great campaign’. I continued to scan the through the woods for any late comers to the party.

Movement in the Northern corner of the woods caught my eye.  The group of four jakes continued to scratch and peck the loam clucking happily. I trained my Hawke binoculars through the under growth hoping for something other than a jake.  I clearly made out the elusive full beard, this is what I wanted, in fact this was the one that had snuck past me earlier on the field.

Calmly, I let the Hawke Optics go around my neck and took up my slate call.  Starting with a low purr, not too aggressive, I called to the turkeys that were outside the window of my blind. They perked up, where was the lady?  Ed’s been holding out, he’s got a lady stashed! The jakes began calling back, just as I hoped they would.  Keeping an eye on the big tom, I purred back.  It was more than tom could stand,  I checked him through the binoculars, he went in full strut and then gobbled.  There is nothing more thrilling than hearing that gobble and seeing the strut of a mature bird. 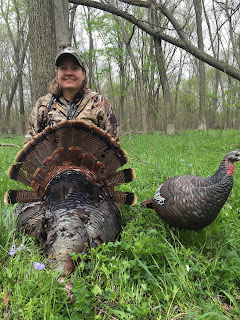 The gutsy little jakes answered back, like hey buddy come to our spring dance and grub party.  They were making my job easy.  My heart was pounding, as the tom decided if anyone was dancing with ladies in his woods it was going to be him.  The tom set off as if on a string right for us.  The jakes continued to cluck and call and the Tom periodically answered until he was within 20 yards of the other birds and my Avian X decoy.  He went into full strut and reach his now fully discolored head out in a gobble, there was no mistaking his intentions.

The jakes seemed pretty impressed, but for some reason the Avian X kept feeding, huh. Mr. Tom decided to kick his game up a notch and jumped onto a half rotten dead fall next to my blind for his next round of ‘I’m the baddest turkey in the woods’, unfortunately, that is when he was perfectly aligned in my scope. As he stretch his neck out to gobble atop the log I squeezed the trigger sending the turkey load to quickly dispatch him.  He had eluded me once, the second time he had not escaped, he would become a tasty Thai coconut curry among other things.

The jakes scattered as I  left the camouflage of my blind, surprised that a human had been in their midst all along.  I could hear them putting their distain through the woods, there were still good grubs to be had despite the show off who fell off the log. I would see the jakes circle back behind me to root through the leaf mold as I left the woods, not much phases them.  The synergy of the day had cumulated into the harvest of a great tom. I marveled at the glossy copper of the feathers and the spurs on the tom’s legs. Using the Hawke binoculars,  I was able to distinguish movement through brush that made the difference between settling for a jake or taking a mature tom.
To think this was almost our national bird, I do understand Benjamin Franklin’s advocacy for this much maligned bird.  This bird provides more than just a meal, it’s beautiful and it’s often silly.  I love seeing them in my woods scratching for bugs and providing hunting opportunities every spring and fall.